I will, for my purposes here, put aside that two new policies put into effect this week by President T have had a direct effect on my life. I will put aside that freezing government hiring put, if only for a couple days, Nicole’s upcoming internship at the VA in jeopardy. I will try to put aside that the ban on Libyans (and others?) coming to this country–for education–effects my own and my colleagues’ livelihoods, to say nothing of the good will we try to engender: a doctor and a dentist (sons of a favorite former student of mine) may or may not, at the time of this writing, get into the country. 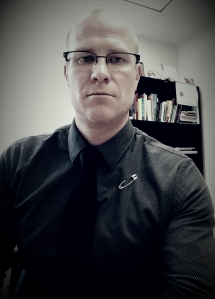 On Inauguration Friday, I wore black and gray and a safety pin. I discussed the significance with a handful of the students, ultimately landing on the most important message: I am your ally; I do not support the President’s jingoism. (Mind you, I’m choosing my battles.) My modest protest made known to a small audience (no dispute there) was important in its relative scale. My middle eastern students–and Japanese and Chinese–needed to know what I thought about the dying of what is good about America. I did my part to unify my local community on that Friday. T’s inaugural speech was not unifying. It anticipated the week to come. My resolve fractured and unified in turns throughout the week.

In spite of my efforts toward solidarity, I felt like shit that Inaugural Friday.

Then there was the Women’s March. I had my questions about what it would accomplish. I asked questions. I got some answers from Laura Fontan, a distant high school friend who linked me to this website. Galvanized by the list, I felt hope by the time I walked into work on Monday.

The “presidential” memos and executive orders began to rain down like so much acid rain, their corrosive power on my work ethic (to say nothing of my will for political action) for the next two days was apparent in hours lost to the endless scrolling on news sites from the left, center, and right. It’s media–social and otherwise–, that “fire hose of information supplied by the Internet” –that can isolate my thoughts; it can help me feel less alone, but dumb me down to think someone else will take care of society’s problems.

I did what little I could, digging, for example, past a post (likely cut and pasted from Breitbart) with selective editing of the AP story (published by several agencies, including Fox News) about Obama giving $221 million to the Palestinian Authority; the edited versions omitted that this money had been approved by a Republican Congress. It didn’t take too long to deduce the agenda behind the report as it appeared on Breitbart.

But, I get it. It is tough for people on all sides. Who has the will to dig for more info when drinking from the fire hose?

My workday and my as-yet-latent activism (and a sound night’s sleep) were victim to the propaganda wars: inundate with so much information that I just don’t know where to start. I was not alone in the outrage, the invective, the hopelessness that I felt after a couple days of inundation: people on social media were threatening to go dark at a time when pictures of fancy dinners and videos of funny dogs are exponentially trivial. [Disclaimer: No judgement on trivial things. Dog videos provide me much-needed daily levity. It seems, though, that the use of social media has to evolve, hopefully outside the bonds of our broadband connections.]

I can understand the need to go into a room with the like-minded. But I am doing daily combat with my algorithms. What the hell good, after all, does it do to post articles and “like” what I want, to argue against those I will never meet, to edit my “friends” list until all I have is an echo chamber of ideas? That is why I write here. Those who may be reading are part of a small group that I would like to grow to include a few more conservative voices. I seek respectful dialogue.

In order to survive (and not suffer the mood swings brought on by too much media consumption), I did not engage in anything but work until 4 p.m. on Wednesday and Thursday (I’m sure my employer would love to know that). And wouldn’t you know it? I got shit done.

I don’t want people to “go dark.” I don’t want people to stop reading, discussing, or questioning. I don’t want people to retreat into their echo chambers. I want to explore workable solutions with input from all sides. Executive orders, as it seems, can be undercut by the courts and successors with ease. However, that certain things are executive orders in the first place puts the reputation of America (and it’s people) in jeopardy. Immigration reform? Sure. But a selective ban on Muslim-majority countries where the President doesn’t have business interests? What else is that other than a farce of ethics, to say nothing of morals? An absurd wall that would take money away from several better causes? And it seems to me that the veterans President T said he would help are in danger.

It’s true: I find solace in the like-minded “friends” on social media. And I may have done more harm than good, adding my concerns to the endless list of concerns people have. But, I am glad to report, that I have reached out to the conservative “friends.” One has engaged, treading bravely into my liberal algorithm. I hope the conversation will continue. And expand.

One thought on “a fire hose in an echo chamber”